Please report your catches back to us, and if you would like a picture of a fish you have caught from one of our waters put on the site, if suitable we will do our best to upload it.

Western Reservoir Syndicate
Northumberland isn’t exactly blessed with a great deal of carp fishing venues; in fact it’s fair to say there certainly aren’t many, if any waters in the county or surrounding regions that offer the opportunity to fish for carp in a large and weed free venue like the Western.

With no restriction to length of stay, Members can relax and enjoy their fishing as part of a friendly Syndicate in the peace and quiet of the beautiful Northumbrian countryside.

Western Reservoir
17.5 acre water supply reservoir with depths ranging between 8-20 feet, the margins are stone lined up to two rod lengths out from the bank, the lake bed is firm with a light covering of silt and there is NO weed present.

The Syndicate was established and opened to fishing in 2012.
Current stock approx. 400 carp; 22 fish per acre, plus home grown fish from successful spawning’s.

No formal swims, but with nearly two thirds of a mile of bank to fish from finding a pitch to fish isn’t a problem.

Other species; roach, dace, gudgeon, perch and eels.
No restriction to length of stay.

Non fishing Partners and Children are allowed to accompany Members; no fees charged. 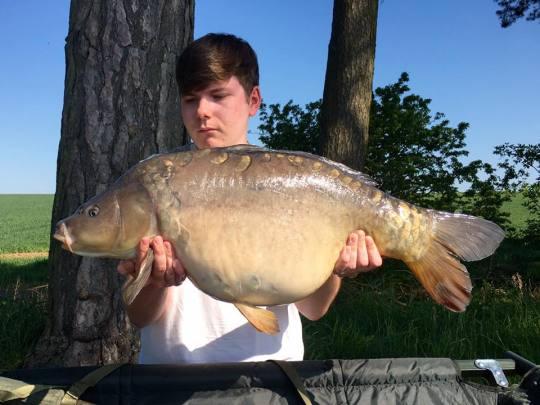 Ryan with his best from May 21lb

Rising water temperatures and that magic ingredient… Sunshine saw the carp get on the move get on the feed and even spawn towards the end of the month, the earliest they’ve ever undertaken their annual nuptials in the Western, not surprising really with this May being the second warmest recorded in over 100 years.

Although it was warmer than average, this far north we still had to contend with a run of overnight frosts and prevailing easterly winds that were rather on the cold side of chilly for most of the month, despite these conditions the reservoir fished well with carp getting caught from all banks on a regular basis.

Joe continued with his short session carping grabbing a few hours here and there whenever he got the chance, he caught on almost every visit as well, amongst his highlights for the month were catching a 19lb 2oz mirror and bagging five in a short but productive five hour session including stockies of 7lb 6oz, 8lb 2oz along with 11lb 4oz, 13lb 6oz and 15lb 8oz mirrors, keep at them Joe, you’re doing well!

As indeed is young Ryan who fished a variety of sessions ranging from one hour to two nights in duration, he had a successful month also managing to catch on nearly every visit.

Ryan started the month with a hat trick of carp topped by a lovely 15lb mirror, as the month went on he continued catching well bagging a mix of stockies and low to mid double figure mirrors, his highlights included landing four to 13lb in a few hours, followed up a couple of days later with four good doubles topped by a 19lb 10oz mirror, a fish he caught last year around 16lb in weight, his biggest for the month was a 21lb mirror which was last out in July last year at 18lb 10oz, some good and consistent angling taking place there Ryan, well done!

Ryan’s Dad Michael also manage a few a hat trick of fish to 12lb 10oz was followed by a brace of mirrors to 19lb 2oz, good to see Ryan’s leaving some for you, lol!

Other Members doing well included; Adie who caught a cracking 21lb 2oz mirror amongst his captures, Mike S who had a hat trick of doubles @ 16lb, 17lb and 17lb, Stephen J with a hat trick of fish to 18lb 4oz, Gary W with a brace to 16lb and Dan with carp to mid doubles.

I have still to receive Catch Reports off all of the Members for May some I know have been catching just as consistently as those mentioned above; 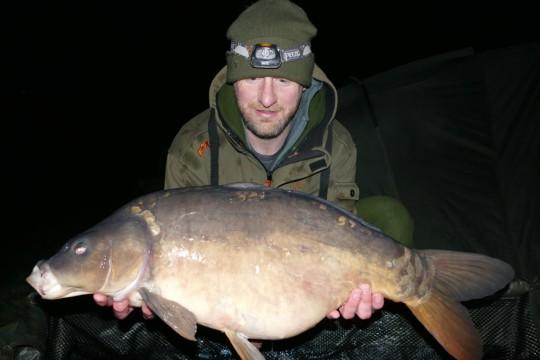 Dull cold and dour, below average temperatures and lack of sunshine meant it was slow going on the fishing front during the first two weeks of the month.

Conditions improved from mid-month onwards but the weather was still all over the place and the water temperature only just got into double figures around the 16th/17th April.

A brief blast of hot weather from the 19th – 23rd stirred the carp up and the fish could be seen moving all over the lake in the upper layers of water, they were difficult to tempt though being more interested in enjoying the warmth of the sun and feeding on emerging fly hatches…

Despite the changeable conditions a few carp were banked over the course of the month getting amongst them was;
Stephen H, Adie, Rich S, Ryan who bagged a string of stockies and home grown carp between 6lb 8oz and 8lb 14oz, nice to get a bend in the rods again Lads!

Jonathan managed a hat trick of stockies and a cracking 19lb 6oz mirror which he said was; “probably the hardest fighting carp I’ve ever caught, it went mental”, nice to hear the fish gave a good account of itself, nowt makes a carper happier than an angry carp…

Mick W is also getting the hang of short session angling, bagging a high single common a 12lb mirror along with a lovely 21lb 12oz mirror, a new PB I’m lead to believe, congratulations to you!

Towards the end of the month strong and bitterly cold north/ north easterly winds and overnight frosts returned making it feel like winter had returned, the fishing slowed right back down as unsurprisingly did visits by Members bbrrrrr….

Let’s hope warmer and more seasonal weather returns and actually stays with us in the coming weeks! Hard fighting 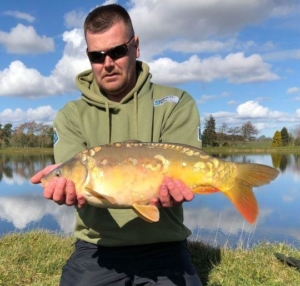 What a miserable and cold winter we’ve all endured.
Unsettled conditions with widespread frosts and prolonged cold spells were interspersed by a few milder periods that saw air temperatures rise. Unfortunately the mild weather only lasted long enough to thaw the ice and raise the water temperature slightly.
You know you’re up against it in fishing terms when the water temperature remains below 3oc for the majority of the winter…
Not surprisingly only a handful or so of Members fished over the last few months, but other than the occasional liner no carp were forthcoming from the venue.

The first carp of the year was caught on the 24th March, the water temperature had struggled up towards 6oc and the carp started moving in the late afternoon sunshine; when the buzzer sounded a little Halloween stockie was the culprit….

I’m keen to monitor the progress the stockies make during the months ahead; it always makes sense to keep tabs on the growth rates your carp are achieving so the right management and stocking plans can be implemented going forward.

Last year’s catch returns showed over 80% of the carp caught were double figure fish; half were in the mid to upper double bracket and ranged in size between 14lb – 19lb 14oz.

The average size of carp caught over 15lb in weight was 17lb 8oz and the venue produced three new 20lb+ fish @ 21lb, 21lb 3oz and 22lb 10oz, all were caught post spawning.
Also featuring amongst last year’s captures were numbers of home grown fish, statistics show; in 2016 3% of carp caught were under 9lb; in 2017 11% of carp caught were under 9lb, personally I think it’s pleasing to see home grown carp recruiting naturally through the ranks, it doesn’t happen often this far north.
It’s been a cold start to spring let’s hope winter eases it’s grasp and warmer weather arrives soon, this time last year the water temperature was already into double figures, at the time of writing it remains around 6oc…